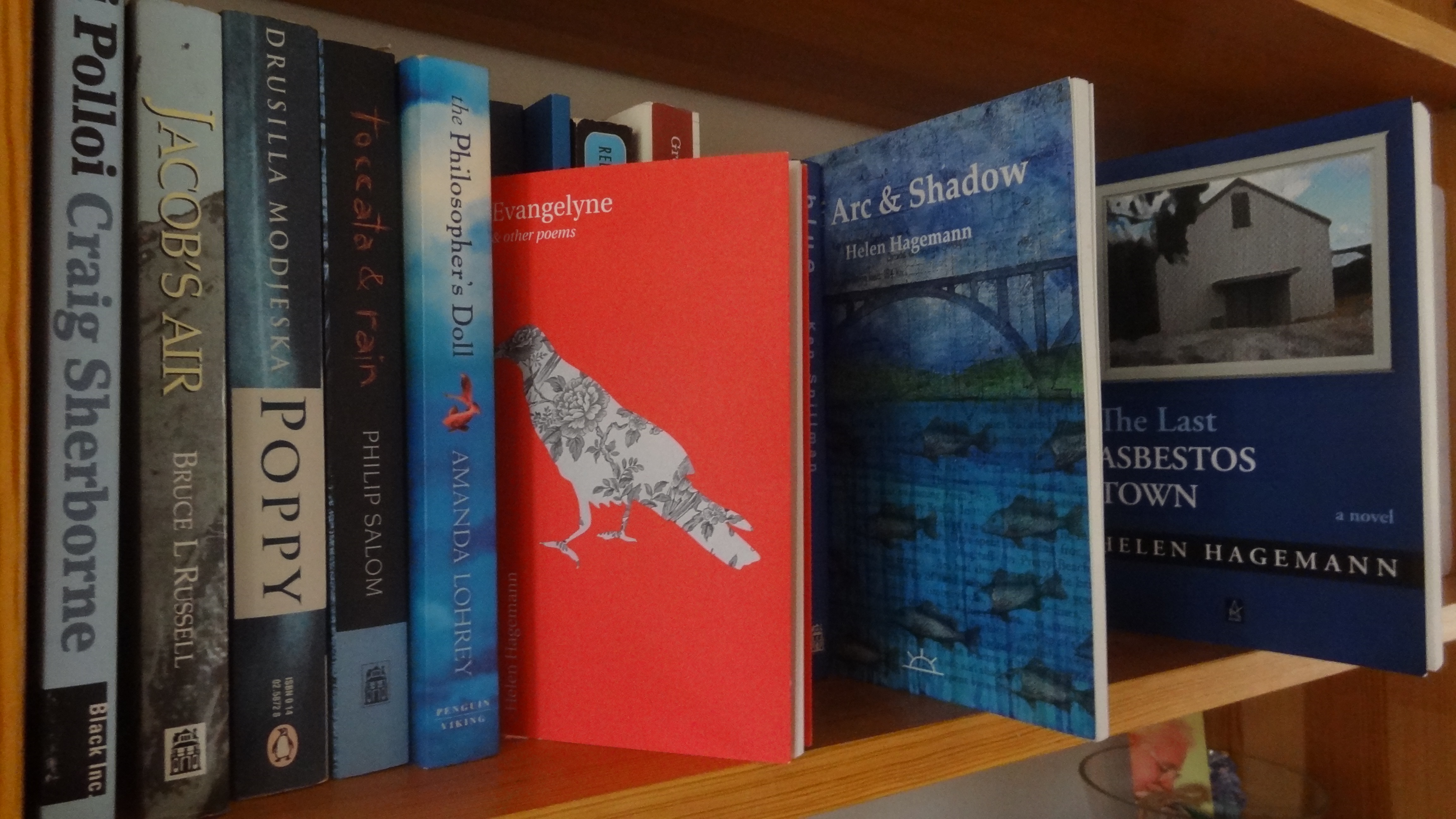 I’m going to include the review, verbatim. One thing I have noticed is that no 2 reviews of my novel are alike. Somehow, readers have viewed the story on many and different levels. I like Miriam Wei Wei Lo’s review and will need to take her advice about predicability. I didn’t see that coming!

*The Last Asbestos Town* is the first novel by poet Helen Hagemann. A young couple, May and Isaac leave the city for the South-West. They buy a house in a country town only to discover that it is haunted and potentially made of asbestos. Their biggest external challenge is with asbestos-removal bureaucrats who want to evict them and tear down their house. The biggest challenge in their marriage is Isaac’s “Kelp” habit. Then there is the small problem of the ghost, Cheryl, who alternates between being helpful and being menacing.

What this novel does really well is place. If you read to appreciate landscape you will enjoy this evocation of South-Western Australian towns:
The park had three miniature gazebos, barbeques, swings and a large stretch of grass that ran down to the river. The tended park with all its shelters, basketball courts and soccer field held no
excitement for her. Rather, the river fascinated May … There was something mysterious about its
quiet repose. In the early morning, the bright sun highlighted the dark inky colors of the purple
swamp hens, and demarcated the dark to light brown tones on the wood ducks. (p. 11)

I enjoyed trying to guess which South-West town this might be based on … Nannup? Bridgetown? Collie? It could be any of them. The horror element of this book is also grounded in place and I will probably never look at a country town’s large drainage pipes in the same way again.

Hagemann also does a good job of creating recognisable contemporary Anglo-Australian characters. May and Isaac are like so many white hetero couples who move to picturesque country towns thinking it will save their marriage. Hagemann’s decision to alternate between May’s and Isaac’s points-of-view in each chapter is ambitious for a first novel but it does give a pleasing complexity to their dilemmas as the reader is positioned to see them from alternating perpectives. Isaac fits the irresponsible-but-charming male archetype and May matches him with the female opposite of responsible-but-controlling.

Plot is the area where this budding novelist probably has the most room for future growth. I like to be surprised by what happens next and I want the conflict, crisis and resolution of stories to be intertwined with character growth in a way that feels (to echo Harold Bloom on good poetry) inevitable without being predictable. There was a little too much foreshadowing in this novel for there to be genuine surprise and while things happened, I’m not convinced the characters grew that much as a result. What I did enjoy in the story, though, was the indigenous characters, particularly Steve and Buzz, and the role they played in bringing the story to its climax.

Western Australia needs as many stories as it can get and I have enormous respect for older women who try new things. I hope to see more fiction from Helen Hagemann that builds on the achievements of this book. I am grateful for this opportunity to swap book reviews with her. By paying critical attention to one another’s work, we create possibilities for the future growth and transformation of one another’s writing.

Miriam Wei Wei Lo is the author of a 2nd Edition collection titled “Against Certain Capture” – re-released in February 2021 by an imprint called the Apothecary Archive, formerly 5 Islands Press.

This site uses Akismet to reduce spam. Learn how your comment data is processed.

An Australian National law has been passed and a group known as the Asbestos Task Force (A.T.F.) is formed by the government to systematically remove all known asbestos from towns, cities and suburbs.

The Newtown Review of Books

Poet from Detroit - "It’s much easier not to write than to write, unless you’re a writer." —Elie Wiesel

A Chick & A Chair Upholstery

The Geography & Psychology of Place (Under Threat)

The Book Reviews You Can Trust!